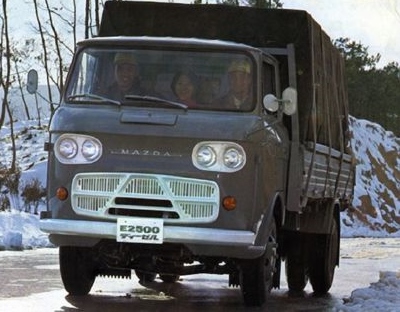 Mazda Motor Corporation began as the Toyo Cork Kogyo in 1920. The company was renamed Toyo Kogyo Ltd. in 1927.  Toyo Kogyo’s start in motor vehicle manufacturer was in 1931 when the company, which had been in the production of machine tools, introduced a three-wheel truck, the Mazda Go. This vehicle was based on a motorcycle.

During the Second World War Toyo Kogyo was involved in the production of weapons for the Japanese military, predominantly rifles.

Production of cars started in 1966 with the Luce and the Familia in 1967. Mazda also started production of rotary engine cars with the Cosmo sports car in 1967.

Mazda began a relationship with Ford Motor Co in 1974. Ford had acquired a stake of 24.5% and by 1995 a controlling interest of 33.4%. During this period Ford and Mazda shared parts, platforms, re-badged vehicles and production facilities. Ford began selling down its stake in 2008 and by 2015 had virtually cut all ties.

All Mazda’s vehicles from 1935 have been named “Mazda” but the company name was not changed from Toyo Kogyo Ltd. to Mazda Motor Corp. until 1984. This name is a play on the similar sounding surname of the founder Jujiro Matsuda and Ahura Mazda the lord of wisdom in the ancient Iranian religion of Zoroastrianism .